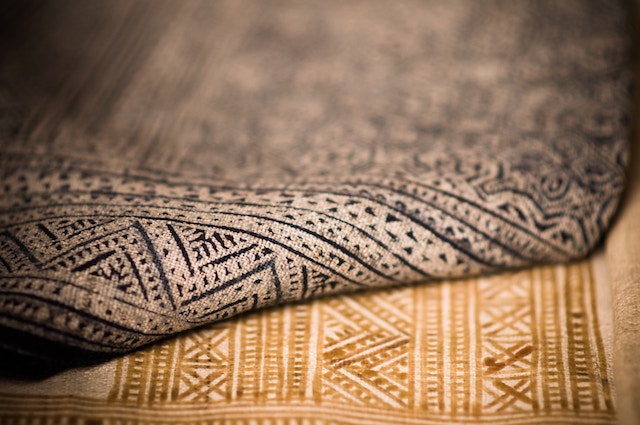 If you are an interior designer or decorator, you probably hard about Milliken & Company which specialty chemical, floor covering, and performance materials.

When I was attending interior decorating classes at Humber College, we had guest speakers and designers to share their stories and promote their products for future interior decorators.

One time, we had a speaker from Milliken & Company.  The representative explained the company she was working for and the collections they carried.

The assignment for the class was to create a floor covering design either for residential, hospitality or commercial spaces.

We were supposed to design one pattern in three colour variations and submitted on presentation boards.

And each one of us had to present the assignment in front of our instructor of the class, other students and the Miliken Carpet representative.

At the end of the presentation, three students’ designs were chosen by the Miliken Carpet representative.


My design for a floor covering is taken to Milliken Carpet

My design was actually chosen. And I was happy about it, temporally.

The next minute, she asked three of us to give her a CD containing the carpet design we did.

Just like that our carpet designs were taken by Milliken & Company.  What we received was a comment of “good work”.

I wondered… Is this how Milliken Carpet creates the floor covering design? -from an interior decorating student???

It would have been better at least if Milliken Carpet hires us even as a part-time assistant designer to provide carpet designs for them.


Milliken Carpet became a global company, not because of its good design but the connection

As such, Milliken Carpet isn’t necessarily designing their floor coverings yet how does it become a global company?

Milliken Carpet was founded in 1865 by Seth Milliken and William Deering.

Today, Milliken Carpet became one of the global companies

“With over 35 manufacturing facilities located in the U.S., U.K., Belgium, France, China, India, Mexico, and Australia and other sales and service operations throughout the Americas, Europe and Asia, Milliken’s more than 7,000 associates work to deliver innovations that do good for the world, create new experiences, and build for the future.”

The reason why Milliken Carpet is expanded in the world like other global corporations is not that their designs are exceptionally good but they have connections to the governments (elite, globalist, establishment and freemason).

In fact, Seth Milliken was a U.S. Representative from Portland Maine and William Deering who was an American businessman and philanthropist.

Many designers, investors and businessmen/women who claim themselves as philanthropists are using the connection and control the system – and this way they make fortune from the industries with cheap labour.

One good example of this situation, I pick up Yoko Ono. Despite the fact that Yoko Ono cannot sing or perform well as an artist, in fact, she was really terrible singing along with John Lennon when they performed in Toronto in the ’60s. She became famous just because she was from one of those families.


As you can now imagine, in the world we live in, this has been happening hundreds and thousands of years – nothing has changed from the bible stories.


What can we do in this system?

I figured this out when I found RAPT blog (in Japanese).

He blogged about how the system works in the world by using events, accidents and even natural disasters happened in Japan.

By reading his blog articles, I was shocked but they made sense to me knowing all those events were actually made by the people; the Japanese government and the emperor who are part of the “Li family (non-Japanese, one of the 13 Illuminati families)”.

They even cause artificial earthquakes, use cancer (which doesn’t exist in the RAPT theories) or vaccine and make a fortune.

And since they own the media, they broadcast news work convenient for them, therefore, fake news for people (brainwashing).

This situation isn’t only in Japan.  It’s in all the Western countries.

Who are those people?  They were the descendants of the Jewish who went against God for thousands of years.

It would be hard to comprehend what I am writing here is something you have never heard from anywhere.

Milliken & Company is just one of the examples of a global company.  There are many big corporations in the world that don’t pay taxes when they make us pay more and more.

If you haven’t found a job as a designer or decorator, don’t blame yourself assuming you don’t have enough skills.

Because that is not the case here.

RAPT theories proved to me so many corruptions in the world.

Because he is a Christian and read the bible so many times, he was able to figure the truth out with praying God every day for 25 years.

I was never a religious person and I thought I was an atheist and that is a good idea.

But, an atheist is another group that the elite want you to categorized in.

Left, right, LGBT, feminism, veganism, whatever the group you might be in, we are divided by them so that easier for them to conquer us.

The biggest corruption could be Christianity is conquered by the Vatican which worships idols (which is ban in the bible) and celebrates Christmas as Jesus Christ’s birthday when there are no written dates of Jesus’s birthday in the bible.

RAPT is a real Christian who receives “God’s Word” every day now.

But the Word is powerful, truthful and a lot of common sense that people are forgotten.

Because of his words which I listen to every day, I started to sew again.  I always loved sewing but I quit when my mom got sick.

And when my mom was in a hospital, I was trying to find ways to make money home. I studied Forex, online business, rich dad poor dad, and tried network marketing even.  I must have been really desperate.

Now I know there is no way you can make money quick kind of things.

So I go back where I liked to be in sewing to create artworks – this makes true sense to me.

I could have gone back to work for a job, but I didn’t because I didn’t want to. That is why I struggled to find a way to make a living.

During these couple of years, I struggled but now I know I don’t want to go back to work like I used to, to be a slave for those people who are controlling people.

My time is precious so is yours.  We need to work for good.

For me, I would like to spread RAPT’s messages out for people who are seeking for the truth.

How to make a triangle zipper earphones pouch